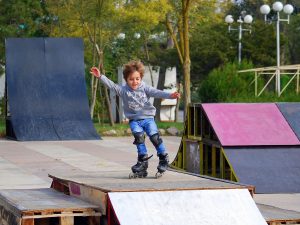 Like every great invention should, roller skates have an incredibly interesting history. Its beginning dates back 250 years ago! Check out the details of the history of roller skating:

During the time America was desperately trying to gain independence from England, roller skates were making their debut in London. No one knows who invented this skate that graced a London stage performance during a show, but it is the first recorded use of roller skates (1743).

Less than two decades later, John Merlin invented the first inline skate (1760). This skate boasted two metal wheels but was not super maneuverable. In fact, it’s been noted in the National Museum of Roller Skating that he actually wore them to a party and crashed into a mirror!

Roller skates saw a huge change in the 1800’s, so it’s safe to say that we’ll cover just the most important information. In 1819, Petitbled patented the first roller skate design. Although this design was incredibly impressive, it lacked maneuverability. Several years later, Robert Tyers patented a skate that looked much like today’s roller blades: five wheels in single file on the bottom of a roller skate boot (1823).

The rest of the 1800’s were an exciting time for roller skates: the first public roller skating rinks opened in London (1857), the quad skate was designed by James Plimpton (1863), and roller skate wheels got a serious design upgrade in the same year that the toe stop was patented (1876). In the 1880’s, America dedicated time and money to mass-producing roller skates. This time period will later be known as the roller skate’s first of many “boom” periods.

Do you have a blast roller skating with your best friend or family members? Well, imagine roller skating at the Chicago Coliseum the night it opened its first public skating rink … with 7,000 other people (1902)! Seven decades later, the Olson brothers of Minnesota redesigned roller skates to make it work for ice-hockey (1979). It didn’t take but a few years after that for one of the Olson brothers to launch the company Rollerblade, Inc.

In 1983, President Ronald Reagan solidified the importance of roller skating as he declared October to be National Roller Skating Month (thank you, sir)! A decade later, skaters had much more safety due to Active Brake Technology that was created and implemented.

Now that you know the history of roller skating, why not head to the rink? Check out our schedule, grab some friends, and have a blast!