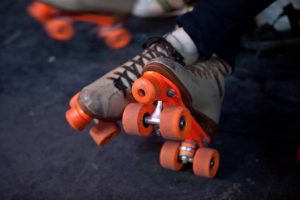 The first recorded inventor of roller skates was John Merlin. Merlin planned to impress everyone by wearing a pair of his new skates to a fancy masquerade in the 1760s. His plan was to coast onto the floor while playing a violin. Unfortunately for Merlin, he was not very practiced, so instead of dazzling his fellow party-goers, he crashed into a large mirror and seriously injured himself.

Much later, in 1819, Monsieur Petitbled patented the first roller skate. The Petitbled skate was a huge improvement over Merlin’s design. Petitbled’s skate was actually an in-line skate made of wood and fastened with three leather straps. The wheels were made of ivory, wood, or metal. Unlike Merlin’s design, these skates could turn corners (something we take for granted today)!

From 1743 through 1863, all skates were in-line skates. And then James Leonard Plimpton came along. In 1863, Plimpton patented the first four-wheeled skate. To capitalize on his invention, Plimpton converted part of his New York office into a roller skating floor and charged for the chance to skate around on his new skates! The idea was catching on, so in 1866 he expanded the idea by converting an area in a fancy hotel into the United States’ first public skating rink!

We’ve come a long way since the early days of roller skating! Now, hundreds of years later, you can enjoy roller skating in North Tonawanda. Make your plans to visit our skate center today!